- Previous studies showed that small fish accounted for three-quarters of the seatrout's food in the Limfjord, while only a small part was a bristle worm. New studies show that the food selection has changed, as just over half now consists of bristle worms, while one third consists of fish.

In winter, however, the food still consists mainly of fish. The trout is not picky, as one can find both bristle worms, fish, crustaceans, insects, snails and mussels in the stomach content.

Bristle worms
Bristle worms are found in sand and clay bottoms, and by eelgrass and mussels, which is why it can be a good idea to investigate bottom conditions before you start fishing. The better you know the conditions in the fishing spot, the better the chances of catching a fish.

Herring
Herring is one of the early guests during spring and is very common around Thyborøn, Oddesund, and in many other straits. It is also present in waters with a strong current e.g. in the area around Aalborg. The sprat is also found in large shoals, which are hunted by seatrouts. When the shoals come in to land, the chances of catching seatrouts are good. Fishing during fall and early winter is characterized by the occurrence of sprat in the fjord. In November-December, the fishing can be hectic in places such as Venø Bay and by Jegindø.

Stickleback
Sticklebacks live in the more brackish parts of the fjord. They enjoy the eelgrass belts during the summer months. The goby is found on sandy stretches, especially in summer. Eelpouts are also part of the seatrout's prey. Black or brown lures or large dark flies are excellent for when the seatrout hunts for eelpouts.

Shrimps
Brown shrimps are found on the sandy seabed and in the more protected areas of the bays and brooks. The Baltic prawn lives in eelgrass belts and comes into shallow water in March, from a depth of 4-6 meters. Mysid shrimps are small crustaceans that can change color according to the bottom conditions. During fall, they gather in dense swarms to wander into deeper water when the frost comes. 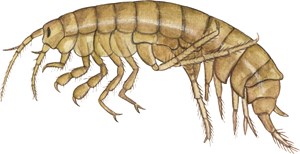